A puzzle platformer where you can stop time and ride bullets. Made for the GameDev.TV community game jam. I put a lot of love into it so  I'd love to hear your feedback.

and make sure to follow me on itch to receive updates on this game! I'll be adding more levels, new mechanics and a few QOL improvements.

Ezra provided me a nice player movement code which I then tweaked to suit the game. He makes awesome games! itch: https://ezra-szanton.itch.io/ twitter:  https://twitter.com/ESzanton

I found like a glitch or a bug. In level 27. You can spawn a platform and stop it right when it's in front of the laser as normal, but if you press K again while on the jump pad below it and you jump, the jump pad sends you upwards and you hit the platform, sending it flying out of the map. Just a visual bug (unless you consider the fact it went back into the dispenser) and I didn't see anything wrong with the gameplay.

The same applies if you stay at the top and push it through.

It's a fun puzzle game! I did manage to softlock it (can't even go to the menu) on level..24? the one with the cube, tampoline, and bullet at the bottom with the goal at the top, because I destroyed the cube.

I don't know if it's difficult to do, but personally I'd prefer if the music didn't start over on levels but just continues looping

not the best puzzle game but its funny, a little easy to my opinion...

Wow the game is amazing ! I especially love the minimalistic art and the clever level design. Good job

ZA WARUDO!! But seriously though, fun puzzle game and clever levels. My only issues is that the controls aren't that tight but I'm just nitpicking. Overall very solid and fun game

I don't know why but the buttons don't work for me at level 5...

YAY I beat it thanks for the good luck :)

The only level which that of the point that 150 IQ players give up...

guys , i don`t know the place to see my money on itch.io , pls help

very fun! would be nice if when you unfroze time on a button the button activated (rather than you having to exit + enter the button again)

you shoot, stop time, jump on bullet, stay on bullet, and unfreeze time. try it out!

Thanks for the help! it worked!

Unfortunately I'm stuck at level 30, but I will be recommending this to Friends!

Thank you so much!
Yep 30 is tough but glad you figured it out!

did you want a solution?

yes i meant a solution

I'm not daichi, but I can provide a tutorial. Solution below, after the "View rest ↓":

Press the top button -> stop time when the laser is blocked -> jump down -> unfreeze time and press the lower button to create a heart block -> move the heart block to the left trampoline and get it to bounce -> jump on the right trampoline, timing the jump so you pass by the laser as the heart block is blocking it.

Took me 24/7 too many trial and error 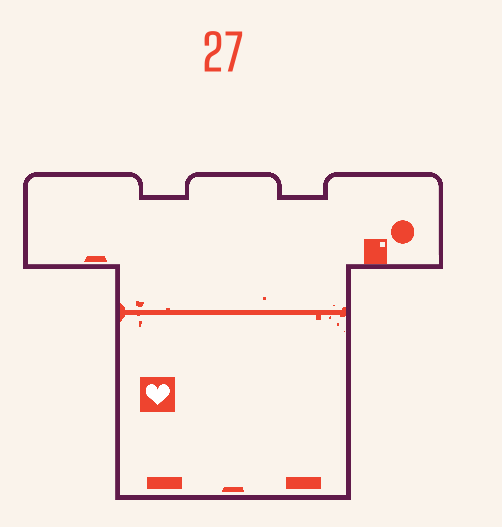 Sorry for the complicated tutorial, but good job on making it. I guess I'll update the tutorial to simplify it for others who need it.

Neat idea, and lots of fun to play through. I do think alternate control options would be a nice addition. Strangely, my xBox 360 controller was able to control horizontal movement with the anlog stick, but no other buttons did anything. Coming here let me know there isn't controller support, but that confused me for a bit.

Very fun and addicting, but im stuck on stage 21. Also, nice. I could recommend these to others! 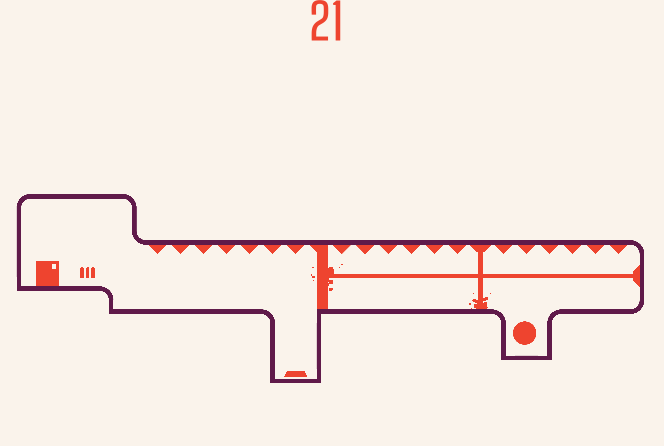 Really cool game. Unfortunately found it a bit difficult to play on keyboard, think I would have gotten on much better with gamepad controls, or more open keyboard ones (not saying you shouldn't have wsad for move/jump, but I would have space as well as an alternative for jump, I find 1 finger and thumb more comfortable to control a character than two fingers in a cramped space).

Also not too sure if I liked the JK choice for the other controls, though I understand why you used them. Personally if I was using a keyboard I would have found those being bound to the mouse way easier. Rebindable controls would be great but I can understand that they can be hard to implement (though if you are using unity the inputs system can make that easier.)

I had to leave it after level 8 (tried it a bunch) because I started to strain my hands after repeating level 6 a lot of times (didn't work out the timing mechanic right away) .

Altogether though I Really loved the art style, music was nice too. The game as a concept was very nice. If the controls were a bit more accessible I would have attempted to play it to completion.

Is level 29 beatable? Also I found a weird glitch on level 28. Menu does not work on level 29. My reddit u/Galse22

Jumping feels a bit nerfed in this update, I think its just me, but I'll leave this here

yeah you can't jump as high in this one, but you can control how high you jump.

I just released new levels so hopefully you have time to play them!

Really cool game, but a lot of mechanics are over-used and the game is always the same :/ The sound is nice but i turned it off after 2 minutes because it is "brrrr tuiii brrr brrr brr tuii tuii tuii" on each level. The graphics are minimalist but good! I really like the palette you've used! But please, add a black background.

This game has a nice game play, with interesting level design and names, it's short and pretty to play, I really liked it.
The art is simple and with a minimal color pallet of 3 colours (also adding the alternative pallet, which in total would be 6 [counting white] ), and it's kinda intuitive, highlighting objects with orange, and solids  with black (same with the changing colour option, in which black is blue and white is yellow), when you stop the time, everything reverses their colour, black goes white, and orange objects go white too, that means that if you can step on them too, the only thing that doesn't change are the spikes, which gives the player a subtle advise that they still hurt the player in stop and normal mode, great work!, also, the screen shakes added that little touch it needed, the only thing that I want to say though, is that it could had a more creative design, abstract design is good, but I think that with something more special it would be greater.

Only sounds, but they fit nice with the game, when you jump, when you lose, when you go to the next level, stopping time, etc, (I don't know a lot about music and audio honestly, but I'll try to describe the feeling) the curve of the note feels right to the actions, a down banishing sound for when you lose, a power outage sound like when you stop time (which also combines with the default color pallet as everything goes black), and an ascending sound or positive transition when you get to the end of the level, all of them are pretty good! (maybe I'm being to analytic about them but I wanted to point them out hehe)

I guess i had seen before the mechanic of stopping the time in a platformer, I don't know where thought, here it's nicely implemented, and it felt intuitive, the player control feels good, maybe the sloppy feeling of being near a round edge it's normally bad, because if the player stands in one of them, they slowly fall, but in this case they are pretty good, when you jump into a solid, the round edges can help you slide on them and that feels nice in this game (also they combine and blend nicely with the artistic style), the names of the levels are pretty funny, sometimes is easier to identify them with those names even, for example, when I read that you can make a super jump with space & W, I tried to beat the game without stopping the time, I completed all the levels until "weee", and also beaten "huh?" the first time without stopping the time, that sounded like a nice challenge too.

Overall, I really enjoyed this short platformer and it's pretty good for being made in a game jam! (a fact that I realised moments after ending the game), I want to see more of your work!
Keep it up and souled!

IT WONT JUMP and its SUPER laggy (dont wanna play ever)

hey sorry I think it should be fixed now. try it out!

if you use escape to pause, then click resume, you won't move

That will be fixed in the next patch coming soon!

Thank you :) Still working on this game on and off and you can expect updates soon!

Really enjoyed this game! Great job. Only wish there were more levels (and also that my guy didn't glide down the front of the bullet and die when I'm on the edge).

Thanks! No more gliding down in the next patch!

add a shortcut to advance one frame without blinkin

but the game is beatufill i really like the game mechanic

ahhh! yes I've been meaning to fix that for a while...

anyway, thank you for playing!

Its still here, and now I'm challenging myself to cheese as many levels as possible, 2 so far

Excellent game! The use of time-stop for puzzle platforming is splendid, and bullets, lasers, and time-stop feel like they could be used for so many levels!

I would like to report a bug I found twice though. During the level that explains what ESC does, if you change the color, return to the game, pause, change the color back, and unpause, it causes you to launch straight up into the goal. I can't seem to recreate this on any other level though.

Hey thank you for playing! and reporting a bug. I'll have to take a look!

What a game! I love the mechanics and the way you design it!

A really smooth game there. it's really nice

I'm sure you've been told this a thousand times already, but this game is good and thank you for making it! Being able to turn the rest of 「THE WORLD」on and off is always fun. I kinda want to see what it looks like from an outside perspective, like the player shooting a bullet and then suddenly appearing on top of it, but I can't think if an elegant way to do that. This game is simply already to lovely to reduce it by adding more.

Thank you so much! If I had a dollar for every time someone referenced JOJO I'd be a millionaire :D
Ah I see what you are saying by outside perspective. That's a neat idea. Perhaps there could be a replay mode where you can see yourself solving the puzzle but skipping all the parts that are paused. My trello keeps getting longer and longer..

Thanks for the game!

I found a few bugs:

Thanks for posting the bugs!
I'll fix them up

By pressing W and Space at the same time you get a giant jump, I think it should be fixed.

I sure will, thanks!

I already used it. You changed the rng level didnt you?